The rock needle in a gravel pile

Words and images by Silvan Metz

"High alpine tour, difficulty up to V, 6-8 hours of climbing time." That makes me take notice. Valais or Bernina? No, in the Ötztal Alps. Now I'm stunned. I associate the mountains around Wildspitze and Weißkugel mainly with generous ski tours. In my memory, gravel deserts appear, not climbing rocks. No wonder this area usually disappears from my radar in summer. On the other hand, the Ötztal Alps are temptingly easy to reach. All right, let's look for this gneiss needle in the gravel pile!

The tour description mentioned belongs to the north ridge of the Verpeilspitze. This amazingly steep mountain hides in the Kaunergrat, a ridgeline of the Ötztal Alps between Pitztal and Kaunertal. Several other rock towers are here. Besides Rofelewand, Gsallkopf, Hochrinnegg, Schwabenkopf and Madatschtürmen, the somewhat better known Watzespitze stands out in particular. More than enough for a whole week. 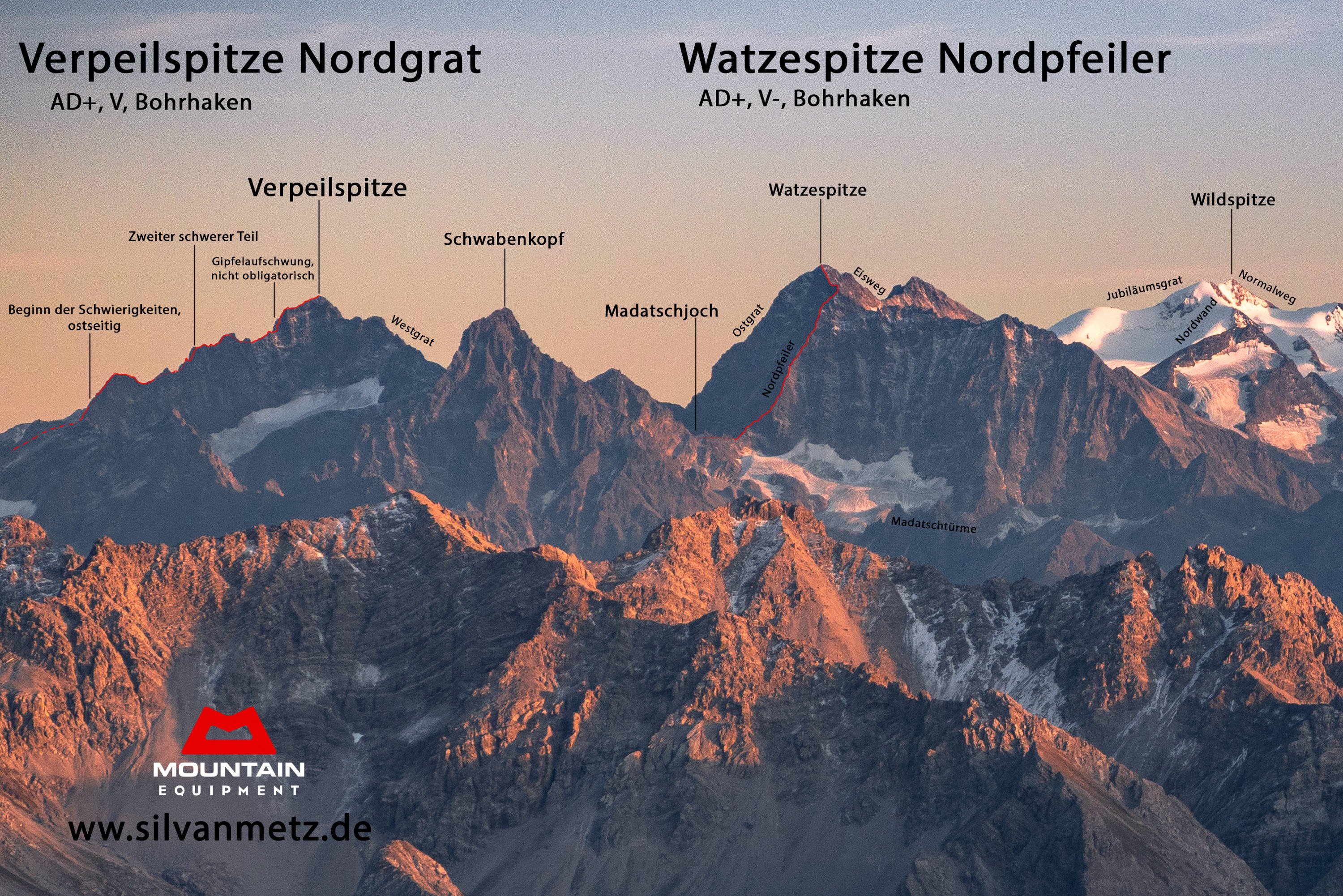 We decide on Feichten in Kaunertal as our starting point. The approach to the Verpeilspitze North Ridge, with 1600 metres of altitude gain, is in no way inferior to its Western Alpine counterparts. It is practical that the cosy Verpeil hut is halfway up. We arrive there in fog and rain. The mystical atmosphere suits the hut well, which stands in a clearing between gnarled larches overgrown with lichen. Only we see nothing of the mountains.

Even when we set off in the middle of the night, the light beams of the headlamps are lost in the mist. The path to the Verpeiljoch is excellently marked and so easy to find that I can stumble along half asleep without hesitation. I don't even notice when we come out of the fog. 800 metres later it's time to wake up. Arriving at the Verpeiljoch, the view widens to the east and twilight bathes the sky in purple. This morning atmosphere would also be beautiful a few hundred metres lower down - but up here it is gigantic! 15 minutes of photography pass in fast motion, now I'm awake.

That's a good thing, because from the Verpeiljoch the actual ridge begins. There is still nothing of difficult climbing or good rock to be seen, instead we start with a careful egg dance over Mikado blocks. But that is only the prelude. 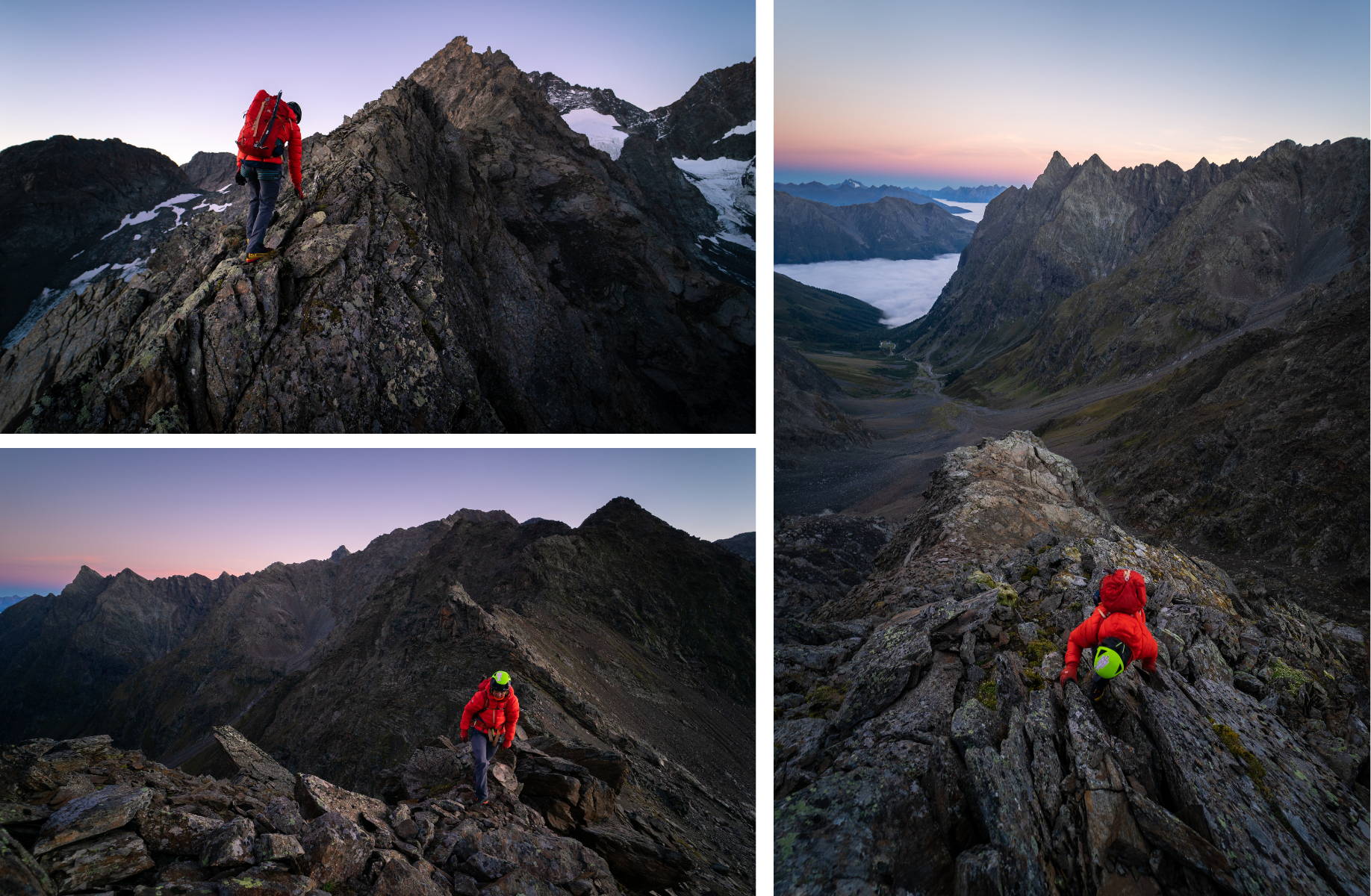 The Verpeilspitze north ridge led a sleeping beauty existence for a long time, until it experienced a well-deserved renaissance a few years ago. The Kaunertal mountain guide Florian Schranz helped this comeback with a few bolts and many words of praise - including a comparison with the Schaligrat on the Weisshorn in Valais. Well, 130 bolts sound more like a quickdraw carnage than a serious alpine classic. But that doesn't mean you can't have fun here. Because thanks to the bolts, you can now climb directly on the compact ridge edge instead of following the logical classic line. The latter often leads into the brittle and dangerous flanks. I have mixed feelings about this when climbing. Real alpine flair may not arise in view of the artificial line and the stainless steel signposts. On the other hand, it allows us to cruise over the ridges in a very relaxed and fluid way and enjoy the climbing in a way that is seldom the case on classic alpine tours of this calibre. I am surprised at how this changes our perception and broadens our tunnel vision. Instead of cam placements and heads, I now see the view around me.

And what there is to see! Around the steep ridge flanks stretch vast deserts of coarse boulders and black gravel, just like in my preconceptions. Without scattered patches of grass and deep blue lakes, this lunar landscape could also pass for a Mordor film set. The many boulder glaciers are particularly fascinating: just like their white counterparts, broad streams of boulders crawl down into the valley. 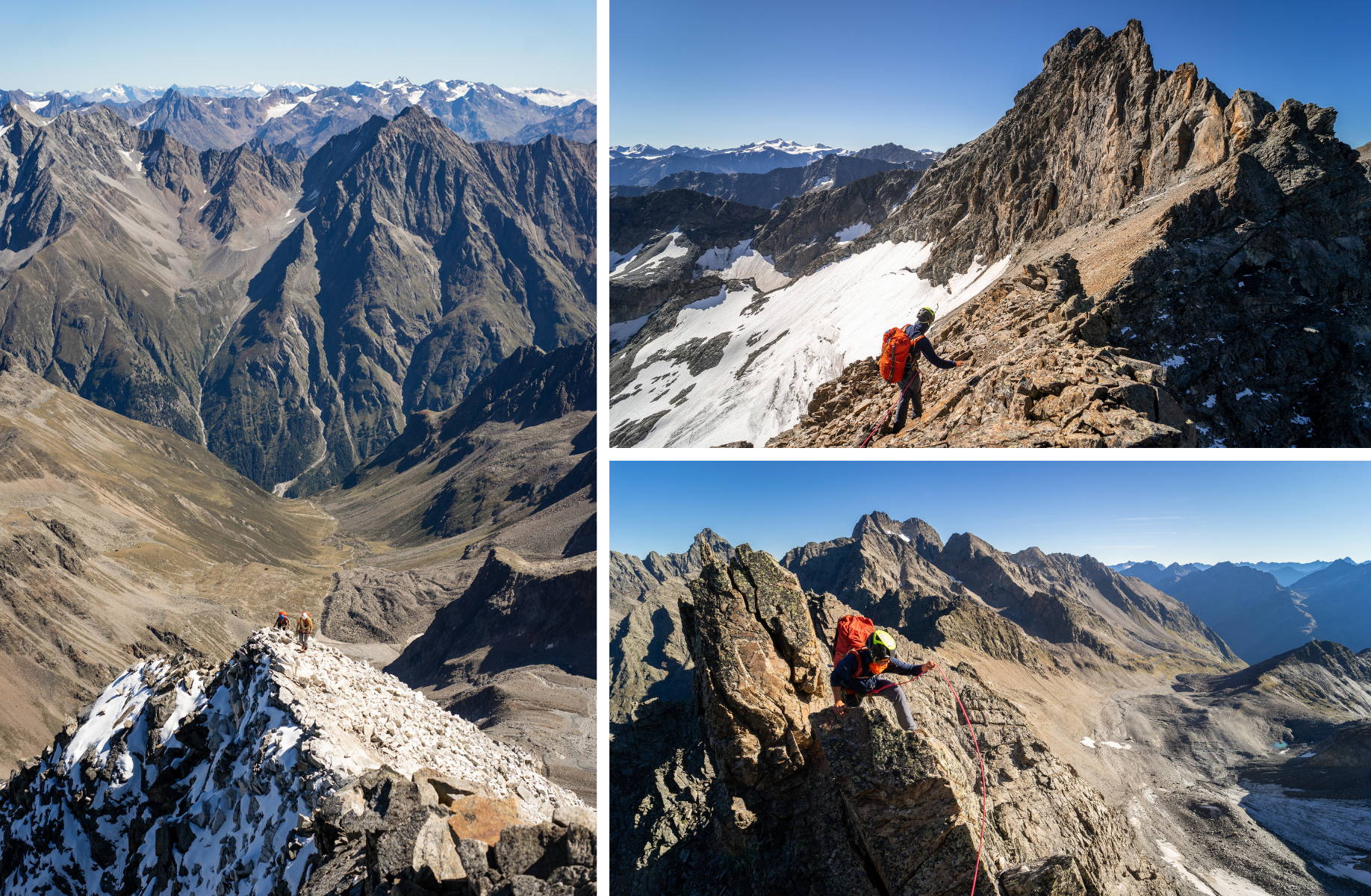 After a good third, the bolted ladder leads more and more persistently through crisp climbing sections, which are even boltet to be obligatory climbed. The rock also becomes increasingly solid, compact and steep. And best of all: all the fun is not over after a few pitches, but drags on. So much so that it is late afternoon when we finally arrive at the Kaunergrat hut. It is conveniently located one and a half hours below the summit, so we are spared a long descent.

The Kaunergrat hut is a real high-alpine base. This is also due to hutkeeper Michael: He not only keeps the logistically demanding hut running, but is also very committed to an ever-increasing range of offers for his climbing-hungry guests. Directly behind the hut there is a climbing garden, a practice via ferrata and perfect course terrain. Above all, however, the range of climbing tours and renovated alpine tours around the hut is growing. Michael either has his own fingers in the pie or supports the bolting folks as best he can. The rustic topo folder in the guest room is already overflowing, but the potential of the area has only just begun.

After the early alpine start at the Verpeilhütte, a (relative) lazy morning is now the order of the day. I like irony, so the next day after breakfast we comfortably approach the "Early morning in the sun" at the east pillar of the Watzespitze. Approaching is the wrong word, from the hut terrace this rock is only three times falling over away. No reason for an early morning, but we are happy to enjoy the „in the sun“-part.

There are four climbing routes here between IV and VII. All of them end sooner or later at the east ridge of the Watzspitze, so a link-up with it is obvious. 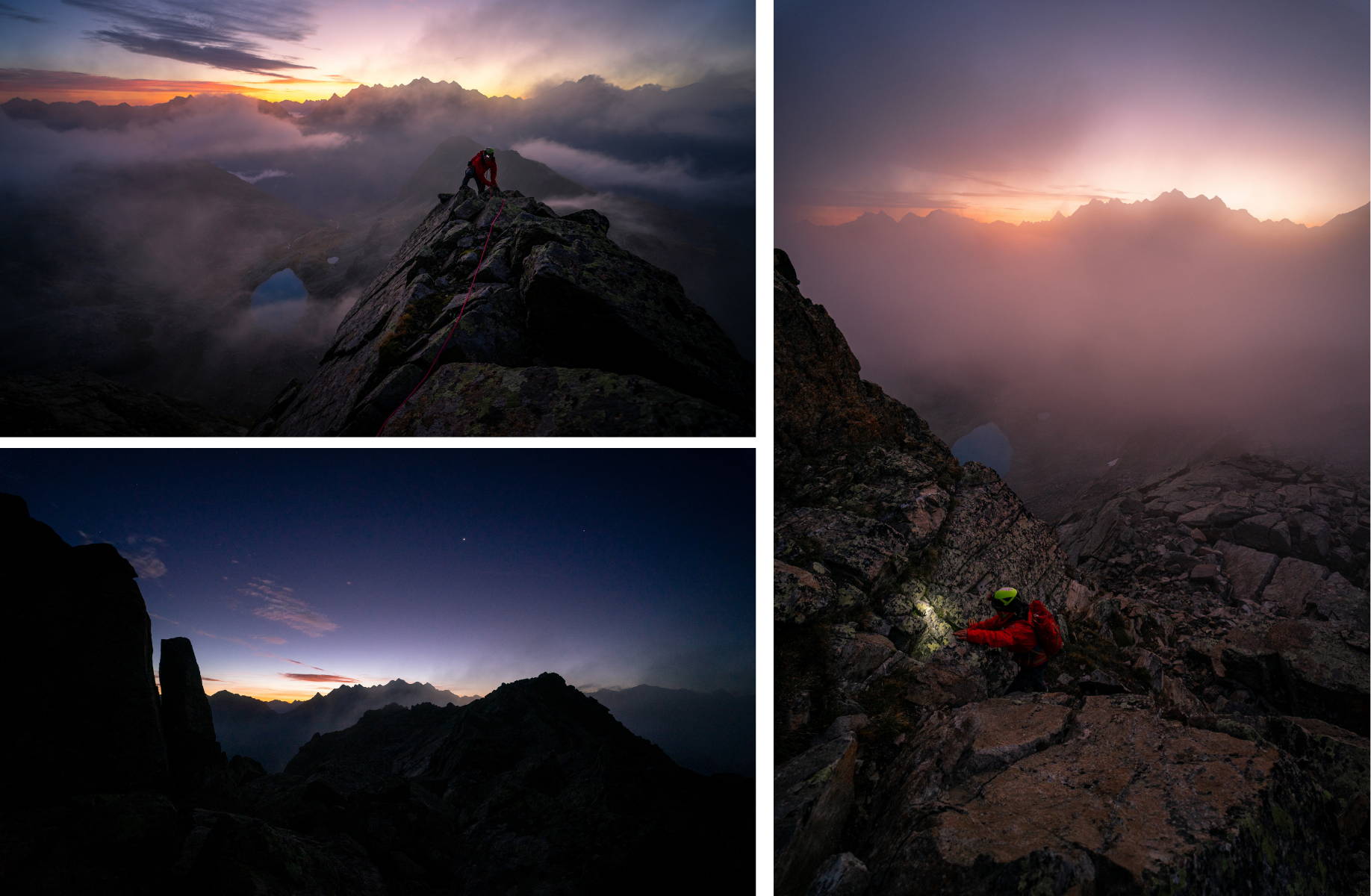 In the "early morning in the sun" it is hardly possible to get lost because of the countless bolts. Somewhat artificial, the line tries to connect the steepest passages of the staggered wall. However, we soon realise that the neighbouring "Herbstwind" apparently connects the most beautiful climbing sections instead of the most difficult ones. But every few pitches you can switch between the routes, so there is something for everyone.

The east ridge route is very busy. Due to the melting of the glacier, the normal route to the highest peak of the Kaunergrat now runs here - despite difficulties in the fourth grade and an impressive climbing length of 700 metres in altitude. There is hardly any walking terrain.

Again we are treated to warm, rough gneiss. It is a rush to climb up this giant staircase. At the summit, the view stretches from the Stubai Alps to the Bernina. We don't have much time to enjoy it, because the way back is long. 700 metres of concentrated descending stand between us and dinner - at the Watzespitze, the summit is literally only half the way, there is no easier descent in summer.

The crux of the day comes at the hut: we have to decide which tour we will do tomorrow. Not so easy, given the choice! There is the north pillar of the Watzespitze, which has also been renovated with bolts. It promises a similar bizarre-flowy mixture of alpine line and comfortable safety as the Verpeilspitze north ridge. The west ridge of the Verpeilspitze, also bolted, is somewhat easier and considerably shorter. Or would you like another sports climbing tour? In addition to the tours on the Watzespitze East Pillar, there are other tours on the so-called "second East Pillar" a little further south, including a praised mysterious finger crack pitch! To the west of the Madatschjoch, the Madatsch towers are a jagged gneiss playground with various routes up to VII and an exciting traverse. The list of classics seems endless. Although one or two have collapsed in the meantime, just as many are waiting to be rediscovered. 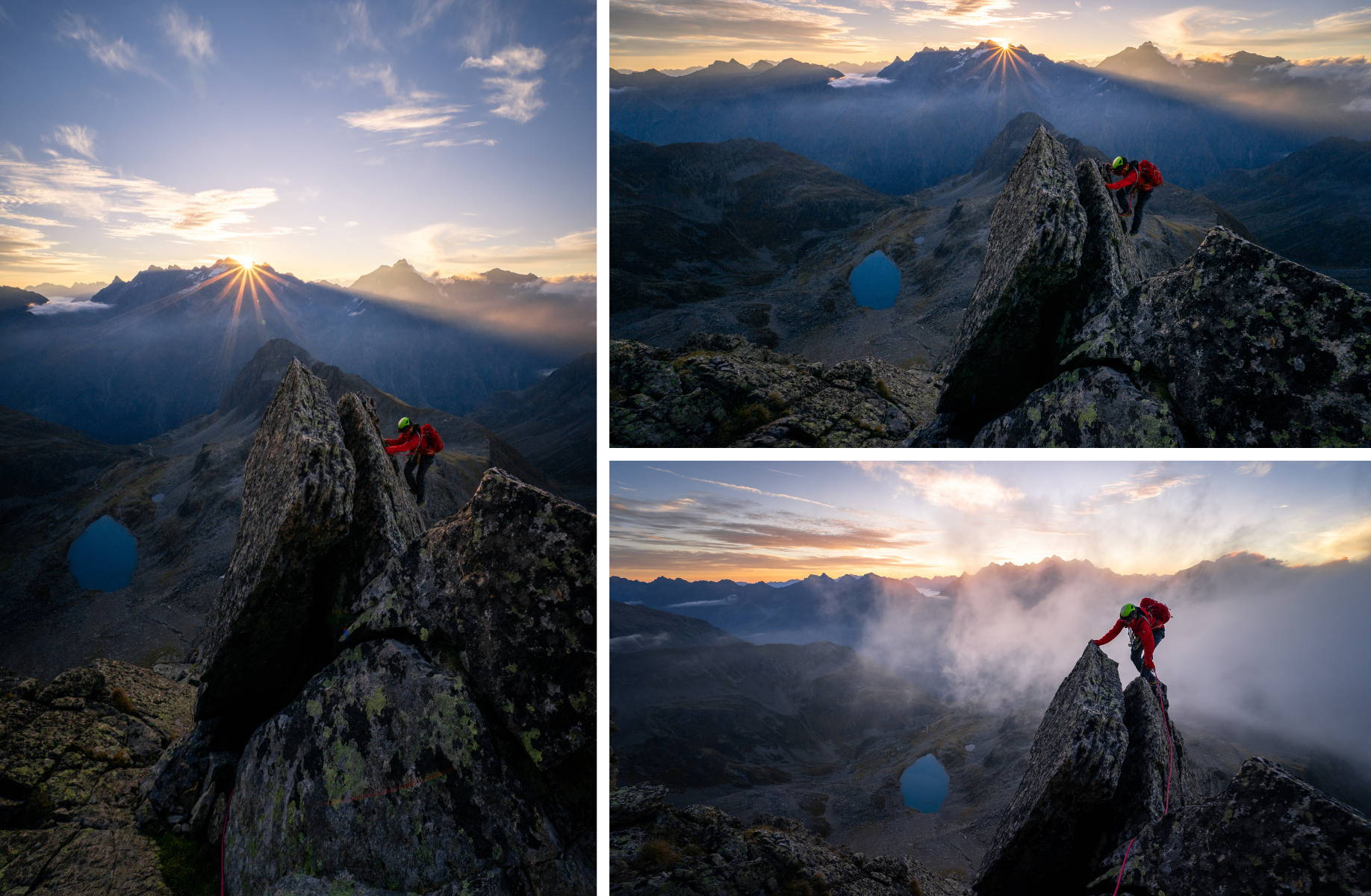 We decide on another bolted tour: the east ridge of the Parstleswand. Hutkeeper Michael recommends it to us as the "best rock in the area" - we have to check it out! An east-facing ridge is predestined as a sunrise tour, so we set the alarm clock once again for an inhuman time. After a good hour's approach to the ridge, everything is forgotten - the sky explodes in a spectacular light show. Time and again, wisps of clouds pass by like the stage curtain between individual acts, giving just enough time for the next pitch.

The metres of climbing pass us by as quickly as the light show. The rock here is different from the surrounding area, real granite instead of gneiss. The comparison is as old as exaggerations in alpinism, but here you really do get that Chamonix-rock feeling for a moment! Unfortunately the ridge is much too short, at the east summit we have the best behind us. Nevertheless, I am thrilled, I would not have expected such rock quality in the Ötztal Alps.

What follows now are easy climbing sections to the west summit. This section can also be tackled as an independent tour - one of the best block ridges in Tyrol for beginners to try out safely in this terrain. 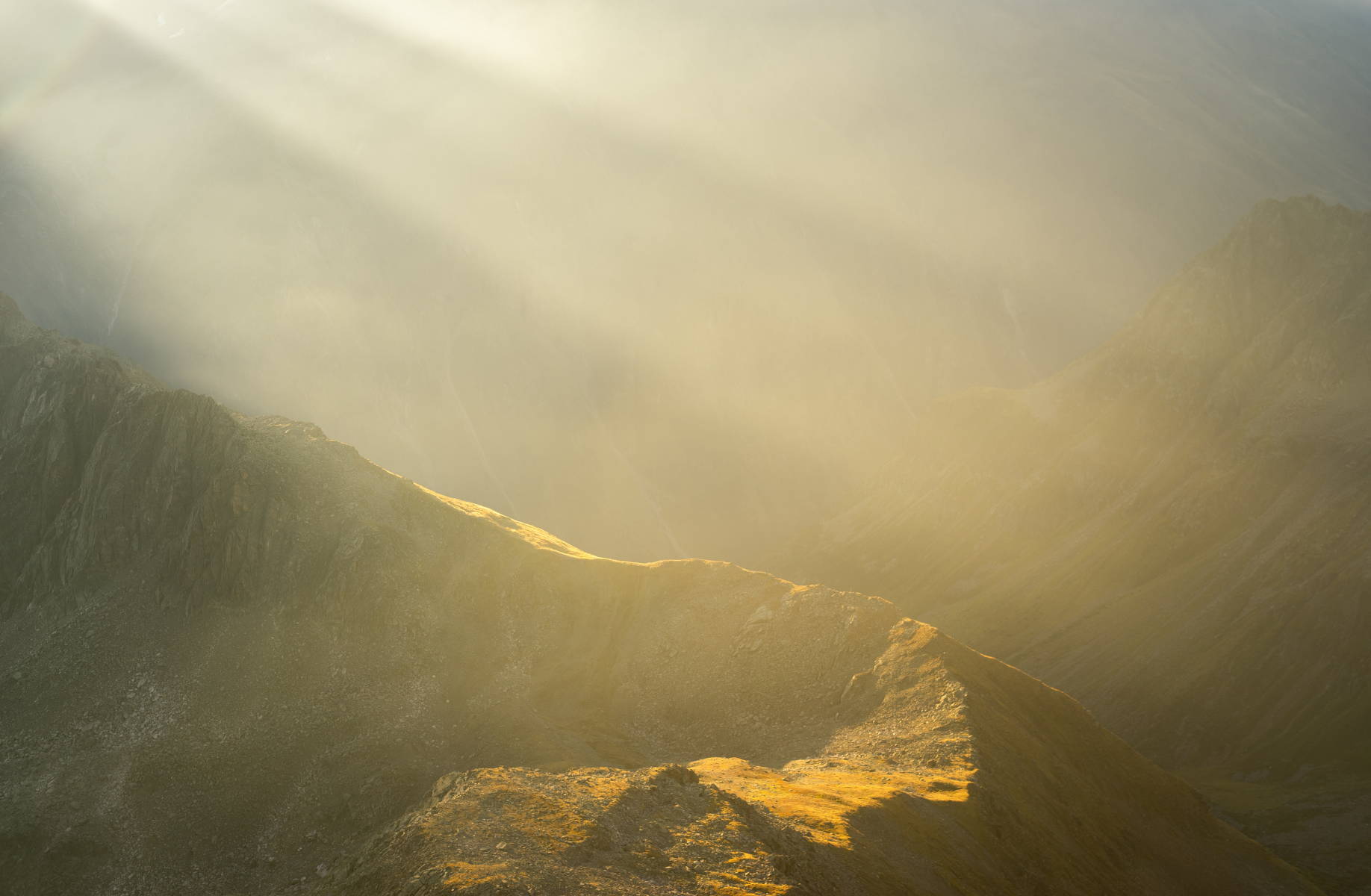 At the west summit, I notice the way to the Verpeilspitze, the Partleswand is actually just a ridge shoulder. Stupidly, the bolts have tempted us to leave the trad gear in the hut, so I quickly discard this idea. Later, Michael explains that a course in Austrian mountain guide training had even equipped this extension with a few bolts shortly before, but "the rock isn't really bad, but.... you know" - Not as good as on previous tours and not an optimal complement to the other, objectively quite safe and beginner-friendly tours in the area.

This is not to say that the Kaunergrat cannot be a playground for advanced and professional climbers: Anyone who is in good shape and feels comfortable in the easy to moderately difficult ridge terrain can really make metres here. Michael tells us about a combination of the Verpeilspitz north ridge and the Watzespitze north pillar. If that's not long enough for you, you can be inspired by Hansjörg and Matthias Auer: The two climbed the entire Kaunergrat main ridge from Kleiner Dristkogel to Gsallkopf, Rofelewand, Verpeilspitze, Schwabenkopf and Watzespitze to Rositzkogel. 38 climbing hours, four days, in winter.

As we descend via the new path on the Aperen Madatschjoch to the Verpeil Hut and into the Kaunertal, we can still see the Madatsch Towers, whose rock, as on the Parstleswand, is very reminiscent of the green-grey granite of the Aiguilles du Chamonix. To the north, however, the mighty wall of Schweikert and Hochrinnegg blocks the view. On their backside, some exciting multi-pitches up to VII+ are waiting in promising gneiss. We have to come back - looks like there are a lot more rock needles in the gravel pile here than we thought!

Only what you need 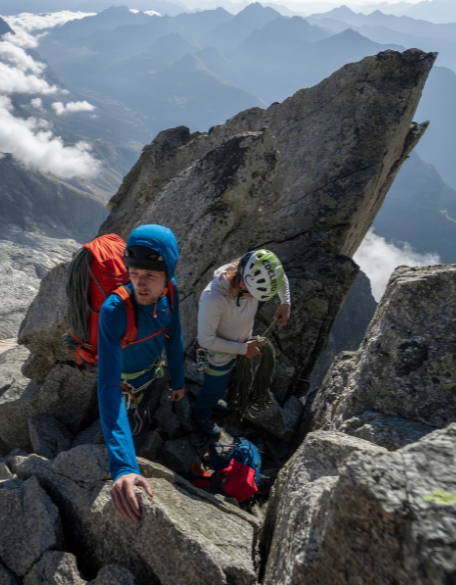 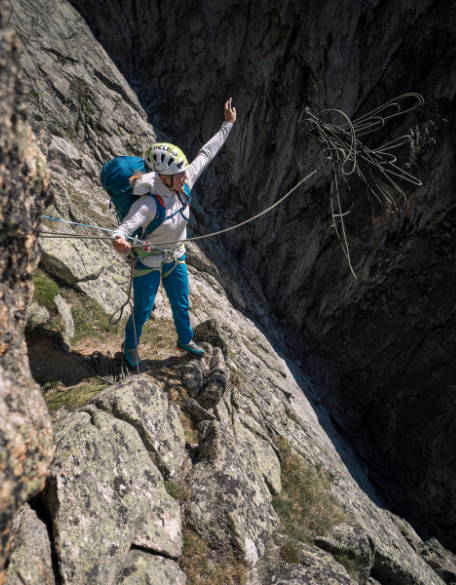 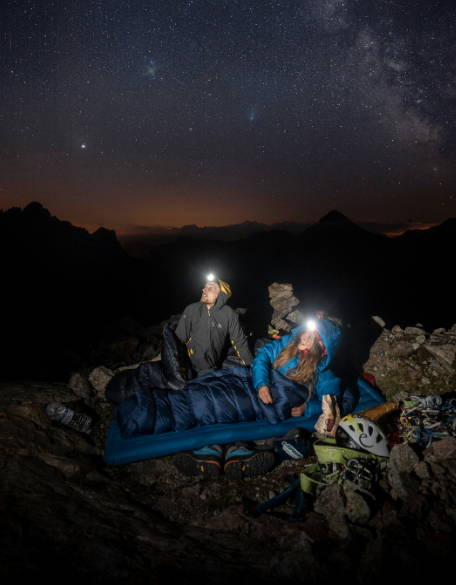